When President and CEO Tim Smith co-founded MD Billing Services with his mother and sister, the whole company fit in the back office of his father’s business. At that point, along with being CEO, Smith had been managing the company’s security. When they grew to 46 employees performing medical billing services for more than 100 providers, in a new 4,000-square-foot facility, it became more than he could handle on his own.

Not only did they need more space, they also needed a reliable security system. He initially went with the building’s previous security provider, but they proved frustrating and inefficient. When he received an expensive quote for adding video surveillance, Smith decided to purchase a system from a big-box retailer and install it himself. But that wasn’t the best scenario either.

“It was way more involved than I expected—trying to run all this cable and stuff like that. It was insane,” says Smith.

Not only was the install process tricky, but the system ended up being so cumbersome to use that it was close to worthless. By the time he could log in and access the video cameras, it was usually too late. While shopping around for a better security solution, Smith encountered one provider who mentioned the benefits of using Alarm.com for access control, intrusion and video surveillance.

“I was extremely impressed with Alarm.com. I know I probably bugged him to death because I kept asking him, ‘I can change a code?’” says Smith. “I asked him a thousand questions, ‘Are you sure it's this easy?’ I almost didn't believe him, but sure enough it's been exactly what I hoped it would be.” 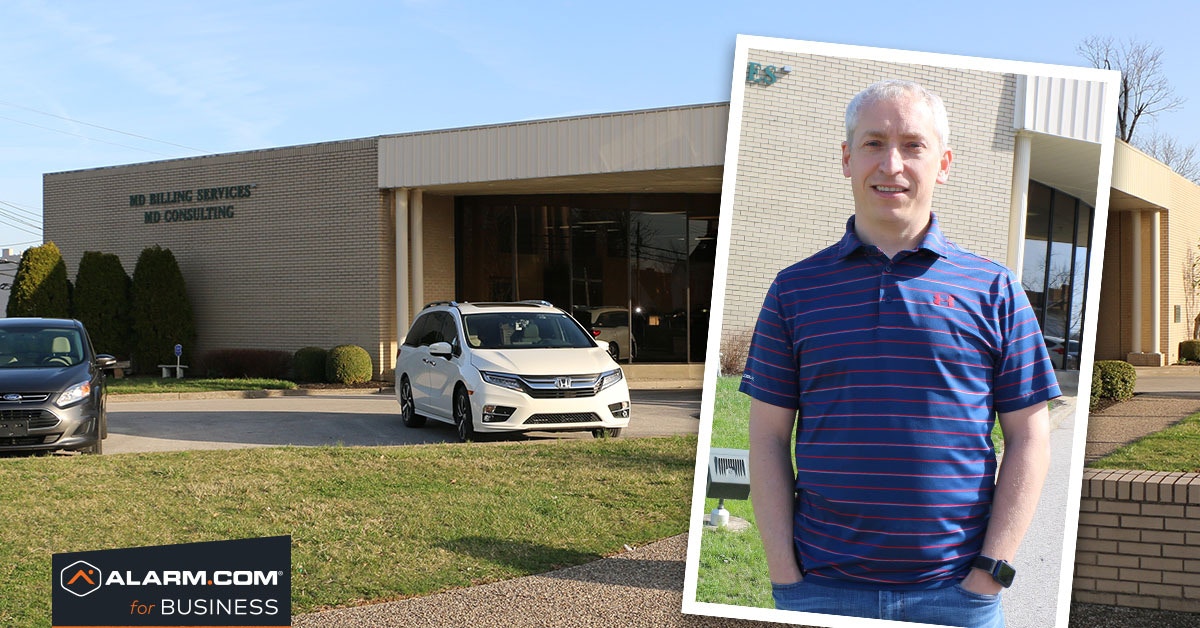 In addition to being able to change user codes in seconds, Smith also found that combining all his security services into one easy-to-use platform has made the whole stronger than its parts. He saves money by scheduling his smart thermostat around business hours, he gets alerts if his IT server room gets too hot and he can quickly view video clips that correspond to access or intrusion events. Plus, he can do all of it from anywhere using the Alarm.com app on his phone. Smith says that having all this information at his fingertips gives him peace of mind and makes his life much easier.

“There's nothing worse than having your alarm go off and you're 30 minutes or an hour away. You're on the phone with the call center and they're saying, ‘Do you want me to send the police?’ You have to make a decision with zero information,” says Smith. “You need that information immediately. And the quickest I can get that is with Alarm.com.”

Get Alarm.com for Business

Alarm.com for Business technology is professionally installed and serviced by commercial security experts. They’ll ensure that whether it’s one location or many, your business is taken care of.